After success of in-store KFC kiosks another big brand decided to hire us to create and maintain kiosk software.

AmRest is a leading European multi-brand, foodservice and digital platform, which is constantly developing and expanding its brand portfolio. In 2018, the Company announced signing of Development Agreement to develop the Burger King brand in 5 countries. With this deal, AmRest wanted to create  a great value for its customers as well as increase the quality of customer service even more. One of the solutions  was already at hand - self-service kiosks, which the company had introduced some time ago in KFC - another brand from AmRest portoflio. To implement kiosks in Burger King they once again decided to engage developers from 3e Software House, who had already succeeded in implementing kiosks for KFC.

In April 2019, at 3e Software House headquarters, a meeting with the person responsible for product development of the Burger King Kiosk at AmRest side took place. The client came with ready-made mock-ups of screens that an agency created for their needs. The result of the meeting was to determine the next steps, i.e. setting the costs and schedule for the project.

Setting the assumptions and priorities of the project was easier because 3e Software House has already created Kiosks for KFC restaurants, which had been successful - improving the quality of customer service and having a measurable impact on the growth of revenue in the restaurants.

Read our article about how we gather requirements
https://www.3e.pl/the-ultimate-client-requirements-document-template

During negotiations it was agreed that we would use the logic that was implemented in the KFC Kiosks, slightly modifying it and adding new screens, relevant to the Burger King brand. (You can read more about our implementation of kiosks in the KFC network here: https://www.3e.pl/kfc-kiosk).

In short, most of the back-end was based on the existing kiosk solutions with our programmers having to adapt it to the menu, POS and the Burger King environment as a whole - of course this also involved writing a new front-end. The whole solution was also built so as to allow full integration with Micros RES POS technology.

The client intended to launch the first Kiosk in Warsaw at the beginning of Q4, so we secured the resources required for the project to meet this deadline. Work on the project started in May 2019. The team consisted of an analyst, two front end programmers, two backend programmers, manager and a tester.

Does it work? Test, test and test again...

After writing the code for the new solution, tests began. On the 3e Software House side, the tests lasted two weeks and were carried out by the kiosk LAB in our company. It is a place where we can perform 1:1 mapping of the infrastructure, as can be found in the restaurant, where you can order products using the kiosk.

After our in-house tests, the product was handed over for UAT’s, which lasted 3 weeks. Our team took care to repair all of reported issues. Work on the project was completed in October, when the client officially announced the end of the tests and the rollout of the first kiosks began in the restaurant on Al. Krakowska in Warsaw.

The kiosks are already there - the benefits too

The first kiosk started on 18.11.2019 in Warsaw - Burger King Aleja Krakowska. Currently, there are 18 restaurants in Poland with a total of 63 kiosks. We asked our client if the kiosks fulfilled their expectations.

Here are some of our customers findings: 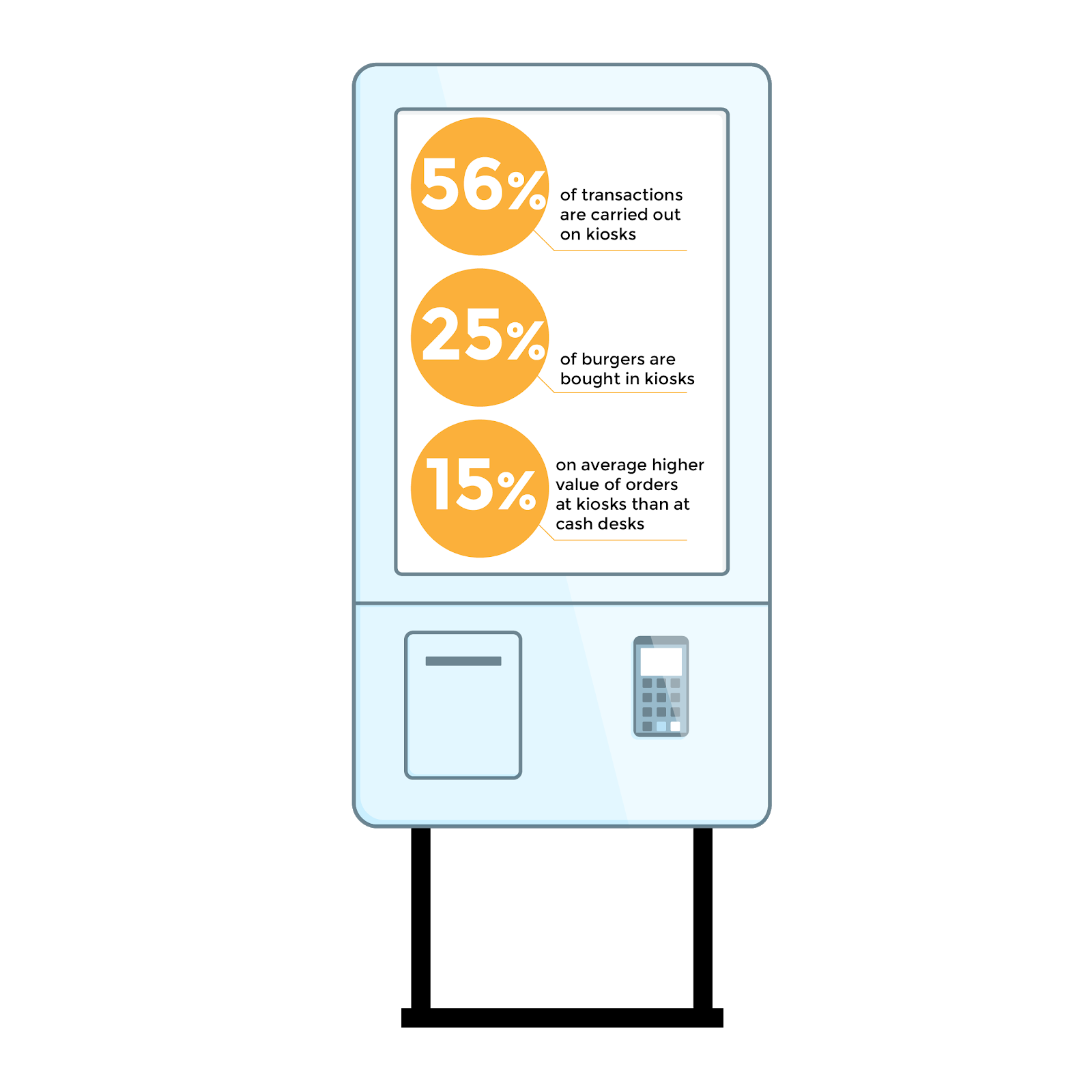 The success of this solution in Poland is an impulse for planning its implementation in other countries. At present, Burger King is implementing this solution in the Czech Republic, and soon the first kiosks will be active in Czech restaurants. So, what is it about kiosks that give so many benefits in a short time?

Why do kiosks bring so many measurable benefits?

Digital kiosks are making a big difference in the HoReCa industry, especially in restaurants. What makes this device so special? Experts in this industry name many reasons for this phenomenon. Here, just a few of them:

More info about  the benefits of kiosk implementation can be found here:
https://orderingstack.com/blog/six-ways-that-self-service-kiosk-support-ordering/